​What is
Old Style Step
Dancing?
Old Style Step Dancing is a percussive type of dance, the steps are danced close to the floor, by people of any age – I know step dancers who are over 80.

Old Style Step Dancing is the precursor to competitive Irish dancing and Riverdance.

Research has proven that dancing is one of the best forms of activity for keeping the body active and the mind alert.

I teach to people with no prior knowledge, sometimes people come to revisit steps from their childhood, some people come to get fit in a fun environment, if you are curious about Old Style step dancing then come along to class, or check the weekend workshop schedule.

Drop me a line here if you would like to further information.

The steps and dances I offer have been passed down an unbroken line from the Dancing Masters of old.

To add my favourite quote from one of my tutors, Michael Tubridy: “wearing comfortable shoes and practising your steps in a relaxed fashion for maybe a half-hour every day, will give you great enjoyment, and do wonders for your general well being, without the risk of damaging your feet”!

(I don't insist you practise a half-hour every day, just whatever you are able, or inspired to do.) 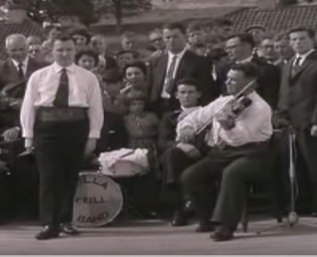 Further background:
Old-style Step Dancing is a tradition related to, yet distinct from the improvisational sean-nos dancing. It is believed that old-style step dancing dates back to the middle of the 18th century, with the dances and steps being passed on by travelling Dance Masters.  Modern-day masters of old-style step dancing can trace the lineage of their steps directly back to the 18th century dancers.  These Dance Masters also choreographed particular steps to particular traditional tunes creating the solo set dances such as the Blackbird, St Patrick's Day, and the Job of Journey Work, which also exist in modern-day Irish step-dancing.

Old-style step dancers dance with arms loosely at their sides, the body held in its natural upright position, with the legs bent slightly at the knees, to give a bounce or spring or easy style to the step.  Steps are danced twice, first with the right foot then with the left, and are danced within a limited space.

This form of dancing was not really competition orientated, it was (and is) danced informally, described by Michael Tubridy as “a self-satisfying form of art, and can give the performer a great sense of satisfaction at being able to beat out a rhythm on the floor, or get up and “dance a step” at a ceili or party or friend’s wedding, - not to mention its tremendous value as a very fulfilling form of healthy exercise". 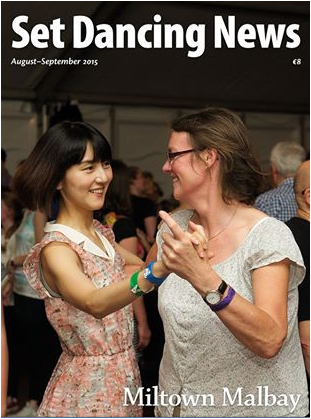 Irish Set Dancing
​
Set dancing is a form of social dancing which has been popular in Ireland for over 150 years. Sets are danced by four couples in a square, and usually consist of three to six figures with a short pause between each. They are descended from the French quadrilles, which were brought to Ireland by the British army in the nineteenth century.
Cover girls!  Yukika Otsuka of Tokyo & Annette Collins of Co Armagh
Irish dancers adapted the French quadrille figures to their own music and steps to ​form dances with great drive and enjoyment. After a period of decline in the fifties and sixties, sets are very popular today in Ireland and in Irish communities throughout the world.

Another form of Irish social dance is ceili dancing. This is a different, separate repertoire of dances which are commonly danced in the North of Ireland, England, America and Australia, but uncommon in the South of Ireland. The dances are in many forms, for couples or threes, in lines, squares and circles, including some in the same formation as set dancing.